Did you know that used hiking equipment such as hiking boots could be a biosecurity risk? International travellers to New Zealand often bring items that pose a serious biosecurity risk to the natural environment of New Zealand. Those items include, amongst others, used outdoor and hiking equipment such as hiking boots. The Ministry for Primary Industries (New Zealand) explains why in this short video. The video is just one of the tactics that the MPI used to increase awareness about biosecurity risks and, eventually, change traveller behaviour. The campaign demonstrates why communicating with international travellers matters and highlights the need to do it in a culturally sensitive way.

A team of specialists working at the Department of Communications and Channels, for the NZ Ministry for Primary Industries developed a communication programme to raise awareness about biosecurity risks related to bringing in a range of items into New Zealand. The aim of the Border Compliance Social Marketing programme was to change international tourist behaviour BEFORE they travel to New Zealand. The programme, described in detail in this Journal of Social Marketing article, is “[a]imed at visitors with the highest identified risk” (targeting travellers from India and China, two countries that send large numbers of visitors to NZ); and “uses a range of interventions in the pre-travel, in-journey and upon-arrival stages of travel.” (Sherring, 2019, p.85). Specifically, the programme’s goal is “to protect New Zealand’s horticultural and agricultural industries, as well as its environment by ensuring overseas visitors do not bring in items that may contain harmful pests and diseases.” (Sherring, 2019, p. 85). In simpler words,  MPI intend to convince travellers not to bring items such as food (cooked or uncooked); animals and animal products, plants and plant products, equipment used with animals, plants or water, and items that have been used for outdoor (such as hiking boots) or farming activities to New Zealand.

In order to achieve this goal MPI developed a programme which targeted several groups of tourists at different times and locations:

The advertisements used in the programme featured a range of images that were culturally appropriate to the target groups. For example, one of the advertisements targeted at visitors from India features the theme of prasad and offerings – a specific religious (Hinduism) practice of offering food and water to a deity during worship (puja). When used at the pre-journey stage, these posters were available in a range of local languages. All communication materials are publicly available on the MPI website.

The case is a useful example of the importance of marketing communications timing and place in a not-for-profit context. For more examples of campaigns targeted at international travellers, have a look at the UNESCO website featuring a number of sustainable tourism campaigns. 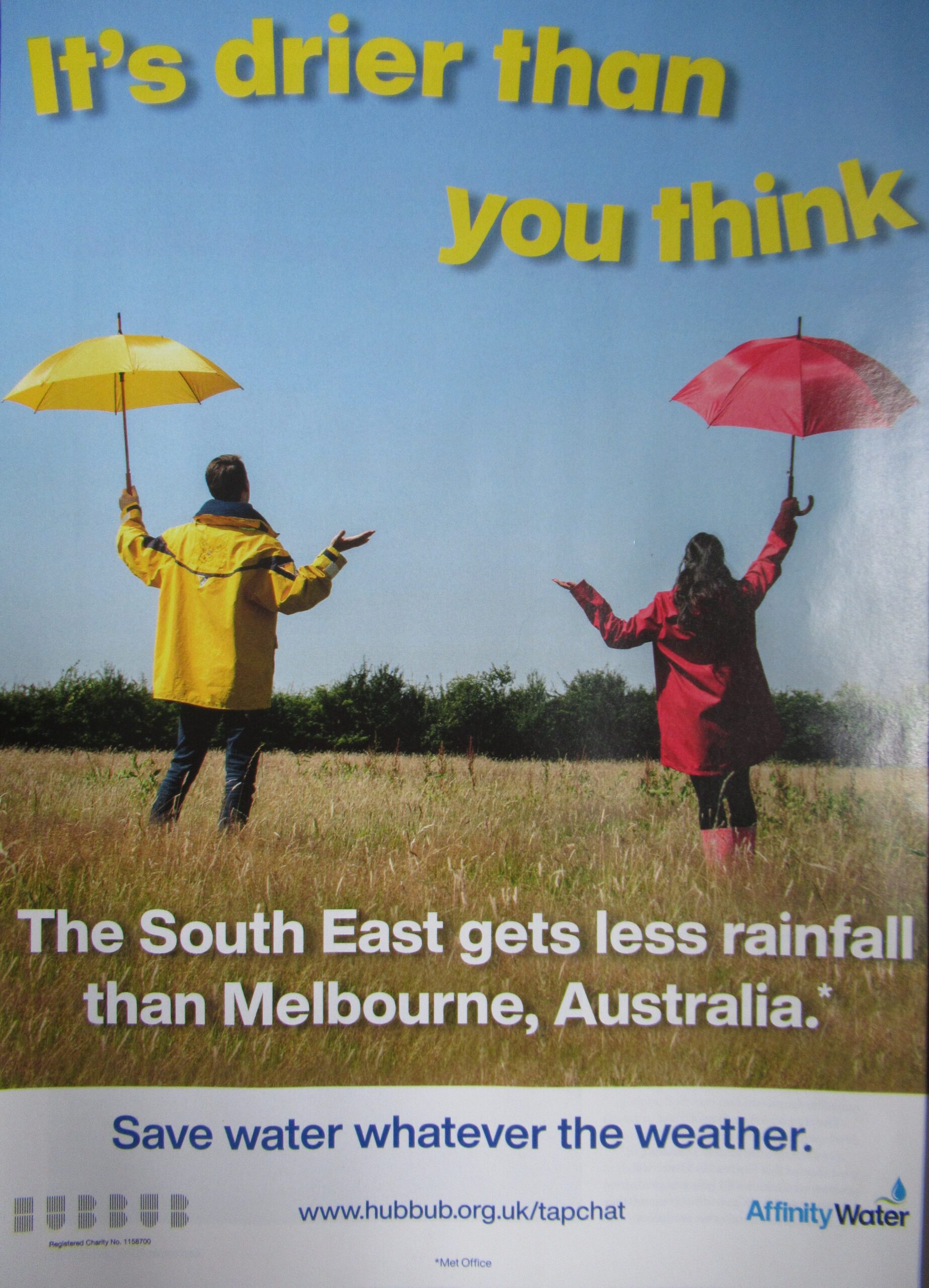 It always rains in England, doesn’t it? Well, it turns out England is drier than Melbourne!

In a series of advertisements (see an example above from the Hertfordshire Living magazine, September 2020 issue), the partnership between Hubbab and Affinity Water take advantage of our perceptions of some pretty dry parts of the world and challenge our beliefs. In a series of #tapchat activities, Hubbab and partners promote water-saving habits and increase our awareness about how much water we all waste unnecessarily. You will find many useful tips on how to save water, but I would like to share my own three habits that help me to reduce the volume of water we use in our household.

The three things I do: